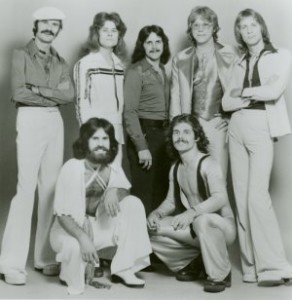 Starbuck circa 1976
Sloan Hayes is 2nd from the right

Real 2 Reel has been in business since 1976 so we get many questions about the way things were done “back in the day”.  Recently, we’ve received a few questions about how a famous synthesizer line in a 1976 hit was done.  While it wasn’t recorded at our studio it was played by our friend, Sloan Hayes.  Sloan was the keyboardist for Starbuck, now a session player and member of Abel, Rawls & Hayes.  Sloan played the memorable melody in Starbuck’s smash hit “Moonlight Feels Right“.  The song reached #3 in Billboard, #2 in Cashbox and #1 in Record World in 1976.  Enough history, on with the story….

So what did he get the Starbuck Minimoog sound?  Sloan Hayes provided the following insight.

“When “Moonlight” was recorded, synthesizers (like the Minimoogs that we used) were monophonic. That is, they only played one note. You could hit as many keys as you wanted, but only one note would come out. Each Minimoog used three oscillators. Normally, they were tuned similarly to a middle note on a piano; one at pitch, one slightly sharp and one slightly flat. That’s what gave those single notes such a fat sound.

Front panel of the classic Minimoog

In order to play multiple parts like the ones in “Moonlight,” mutitracking had to be done in the studio, and mutiple Moogs had to be used live. I used two Minimoogs and played two of the background lines in the verses and two of the answering lines in the chorus, and (at gigs) David Shaver used another Minimoog to play the third part. The parts themselves were written by Bruce Blackman on his original home demo. Jimmy Cobb, the bassplayer, also used a Minimoog to play the bass part. In all, we used six Minimoogs on stage.

The lines during the verses were played (a single note at a time) while the “Cutoff Frequency” knob was turned from the left to the right (clockwise). I suppose it could have been set up to make the filters open and close automatically in sync, but doing it manually was just easier.

The oscillators were all set at the same range (8′), all using the same waveform (the first of the square waves, or fourth position from the left on the Waveform switch). The synth solo was done with the same setting and with the cutoff frequency “open.”
Tommy Strain (the guitar player on “Moonlight”) reminded me recently that after several attempts at the solo, Bruce and (co-producer) Mike Clark threatened to retune the synth to an easier key if I didn’t get it right soon. I got it right on the very next take. I work better under pressure.”     Sloan Hayes

Sloan Hayes performing on “The Midnight Special” using a pair of Minimoogs for that signature, fat sound in “Moonlight Feels Right”

P.S. there will be a reunion of many artsits from the 70’s at “The Greatest Yacht Rock Revival In The Universe” on August 18th at Piedmont Park in Atlanta.