Atlanta based guitar player, Johnna Jeong has been working as a performer and instructor for a number of years. With an eclectic background in Classical, Jazz, Blues, Latin, and popular music, she maintains a busy schedule as a musician. Performing as a soloist for Weddings, Private Events, Country Clubs, and  also in various ensembles throughout the Southeast. In addition to being a solo artist and working in other music collaborations, she is also a committed music educator. 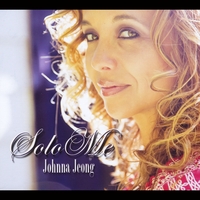 Her 2014 solo guitar CD release “SoloMe” has inched it’s way to US and Canada’s radio play.  “SoloMe” is a collection of Latin, contemporary, and original guitar compositions and is now available at CD Baby, Amazon, CD Universe, and  I-tunes.  Her CD was recorded at Real 2 Reel .  The project was engineered & mixed by James Cobb and mastered by Steve Rawls.

A recent review from Minor 7th Music: “In her debut CD, Johnna Jeong opens a window to her soul by giving us a glimpse at the music she holds most closely to her heart. “Solo Me” is a collection of Spanish/South-American compositions, as well as several works composed by Jeong, all of which gracefully bridge the gap between classical guitar, jazz, and popular styles. The album as a whole has an immediate and broad appeal, all the while exploring immense musical and emotive depth. All of the selections feature distinctive rhythms, bold compositional gestures, and haunting extended harmonies. Jeong displays an effortless command of the instrument as she navigates the complex interpretive language that this style of music demands, bringing to life the spirit of this powerful and unique genre. “Solo Me” is a perfect introduction to Jeong, showcasing not only her outstanding playing, but also the music she holds most dear. © Timothy Smith”